The Alliance has adopted an original internal organization, respecting both the principles and the functioning of an international network. The constitutive bodies of the Alliance reflect this necessity (see governance diagram).

The Alliance’s venture is of course mainly based on its member publishers, who come together within the Assembly of allies. It also relies on an Executive Committee – accountable for the respect of the decisions made by publishers – and a permanent staff. Besides, some faithful volunteers make it possible to implement activities that would not exist without them.

Communiqué to all members, March 2011: Announcement of the setup of the International Committee of Independent Publishers (ICIP)

In line with decisions taken at the 2007 International Assembly on Independent Publishers in Paris, the language network Coordinators and the Board of the Alliance have been meeting on an annual basis since 2009 (please see our November 2009 Communiqué).

On 11 October 2010, the Coordinators and the Board of the Alliance met in Paris and decided jointly to create “The International Committee of Independent Publishers” (ICIP) [...].

Because the publisher members – Allies – are the primary players in the Alliance, the members of the ICIP and the Board of the Alliance are submitting the creation of the International Committee of Independent Publishers (ICIP) to your approval.

To facilitate communication between the Alliance’s language networks, set up as “one of the Alliance’s working practices” pursuant to a decision adopted in Dakar, each language network has a coordinator (elected by its particular members). The role of these coordinators is: to check that their network members and the Paris team members receive all relevant information; to liaise with the Paris team; to monitor the progress of projects that the network wants to carry out (co-publishing, sharing of expertise); to examine and give an opinion on applications to join their network and to liaise with the Paris team to organise network meetings. The language network coordinators have been members of the International Committee of Independent Publishers (ICIP) since March 2011.

Presentation of the Alliance’s language network coordinators and vice-coordinators:

Communiqué to all members, November 2009

On Monday, 12 October 2009, the Alliance met with its 5 linguistic networks coordinators and 6 committee members. This meeting, organised by the permanent task team, provided the opportunity to tackle various topics of vital importance to our initiative. The full report – including the minutes of this long and exciting day of work– was sent in French to participants. The latter nevertheless requested that a communiqué detailing the main issues discussed and decisions taken collectively be compiled in the three working languages, for distribution to all members of the Alliance. 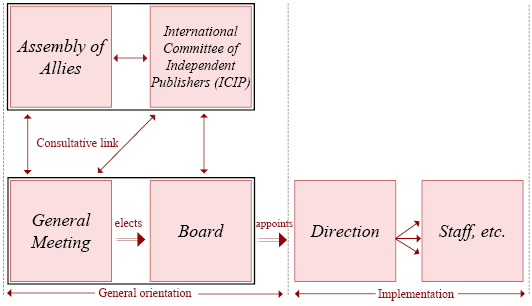