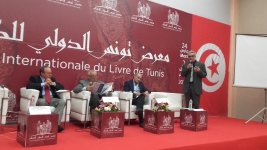 In partnership with the Tunis Book Fair and the Union of Tunisian Publishers, and thanks to the support of the Fondation de France and the French Institutes of Tunisia and Lebanon, the Alliance organised a day focusing on public book policies in the Arab world on Thursday 30 March 2017.

Publishers from Algeria, Lebanon, Morocco and Tunisia presented a panorama of book public policies in their respective countries : Chilean and French publishers spoke on what is being implemented in their countries – a dialogue and exchange between professionals and public authorities, between continents, between cultures.

This day was initiated in the context of the Bibliodiversity Observatory and the mapping of public book policies in Latin America and the Arab world, on-going at the Observatory.

Read the conclusions of the meeting_in French.