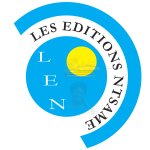 Ntsame publishing was founded in 2010 by Sylvie Ntsame, writer and former president of the Union of Gabonese Writers (UDEG). The publishing house is located in the Nzeng-Ayong district, in a complex consisting of a secretariat, a bookstore, three machine rooms, a boardroom and five offices. A priority is to make books whose copyrights are paid to published authors. Sylvie Ntsame explains that their mission is to “to produce books of all kinds, and to disseminate them on the national level and outside the country”, and adds “I wanted to cast my little stone in the building, for a stream of local productions to be published”. She aims to make the national writers’ books more visible on the national territory in order to raise the public awareness about the literary works produced by Gabonese writers but also to inspire the pen of the latter. Ntsame publishing aims to master the entire process of book making so that the books they publish are entirely made in Gabon. That is why this structure has a digital printing facility.